Drinking good quality tea is an experience inseparable from the product ‘tea’ and its attributes. The flavour and aroma of the tea are experienced by our senses (taste as well as smell). The attributes of a drink product like tea have to be felt, and consumers now are more interested in that experience than in the details of the product’s attributes (though some attribute information will remain important, e.g., regarding health values).

When purchasing the product, experience during shopping is also of significance. It is often said in the digital age that if consumers are only seeking the product, they can buy it online from an e-commerce platform. If consumers do go out and visit a brick-and-mortar shop or store, they expect the experience of shopping to be more fulfilling, such as involving interaction and action, which may trigger more thoughts and feelings.

Advancing experiences entangled with buying and consuming tea seems to be the main motivation and inspiration for the Singapore-based company TWG Tea. It was founded in 2008 in Singapore, but in 2020 already has over fifty physical locations of tea salons and ’boutique’ stores  in major cities in over 20 countries around the world (e.g., Singapore, Bangkok, London, Paris, Vancouver, Dubai — some of its outlets are actually concessions, such as in premium department stores).  The combination of a store and a tea salon is vital because it expands the array of experiences TWG Tea readily offers in association with tea. Its physical presence is joined by presence in the digital sphere, online and mobile.

The vision of TWG Tea may best be learnt from its own statement: “TWG Tea, which stands for The Wellbeing Group, was founded in 2008 as a luxury concept that incorporates unique and original outlets, exquisite tea rooms, and an international distribution network for professionals” (The Story of TWG Tea). The company thereof aims to create upscale experiences in elegant venues, and to make them available internationally. In an interview to Forbes in 2017, co-founder and CEO Taha Mouqdib explained that the company planned from start to be an international brand, and they invested in distribution before their first location was opened (Forbes, 27 April 2017). 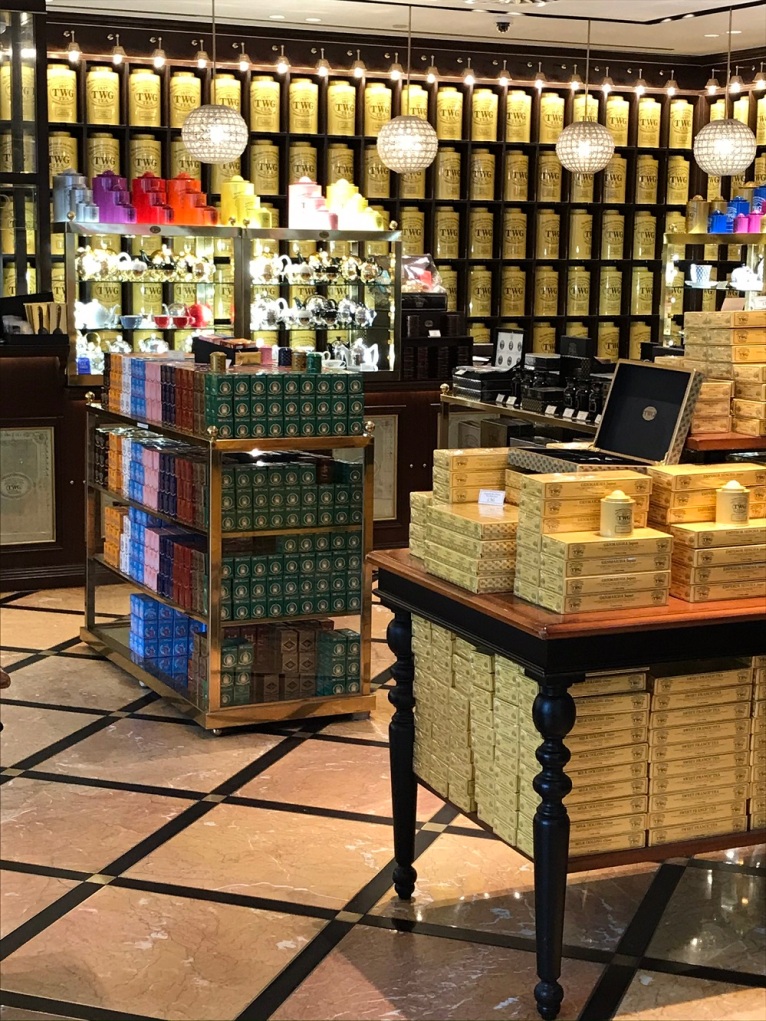 At its venue in Leicester Square in London TWG Tea operates a store on its ground floor and a tea salon on the first floor. A colourful and vivid sight of the store’s scene meets the visitor right on entry. Attached to surrounding walls, boxes of tea are placed in wooden cabins. Packages of tea and biscuits are placed on desks and shelves — gold is salient as 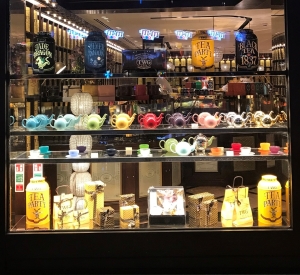 the colour of packaging of some of the products. Tea accessories, especially pots and cups, are displayed in vitrine-cabinets. TWG Tea says they offer some 800 varieties of tea in loose tea leaves and tea bags (the vast majority of tea selection is in loose tea). The wooden panels and counters, square-tiles of the floor, and overall arrangement are nit and pleasant, and give a sense of shops of earlier decades (before 1950s).

The tea room or ‘salon’ upstairs welcomes the visitor into a large hall, elegant and well decorated, with neatly prepared tables covered with white maps. There is plenty of light 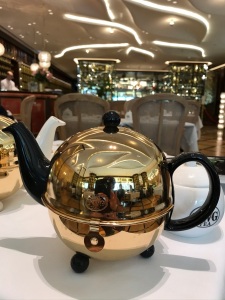 in the hall during the day. One can drink tea chosen from a large selection of a special tea menu accompanied by dessert delicacies (e.g., patisseries, macarons). The tea menu comprises probably around 100-150 kinds of tea (not counted), divided into categories of species, time of day, and added flavour. Visitors with greater appetite, however, can have a larger meal. A book with the story of TWG Tea, its types of tea and photos from its stores and tea salons awaits the visitors on each table. The fine tea accessories for serving tea (particularly the tea pots) and desserts, with a courteous staff service, add to the general atmosphere. It is fair to describe this tea salon as ‘exquisite’, somewhere between traditional tea rooms and European coffee houses. The experience can be multi-faceted — visual, gastronomical, entertaining, emotional, and social.

The company uses the year “1873” as a symbol to mark the year in Singapore when the “island became a trading post for teas, spices, and fine epicurean products“, though TWG Tea does not really belong in that historical period and was founded only recently. The brand tries to borrow values, expertise, and a glow of heritage as if it existed since that time. Styles of older times are reflected in the design of tea packaging in tin boxes and in interior design of stores and tea rooms (e.g., wood panels, crystal chandelier lamps, marble floors, furnishing). Furthermore, TWG Tea relishes the tradition of serving tea and other delicacies in elegant ‘timeless’ accessories (cups, pots, saucers & plates), yet reminiscent of past decades.

Mouqdib points out in his interview to Forbes his guiding values of authenticity, passion and perfection. Guarding authenticity could be emphasised  as a way needed to compensate for the actual lack of long history of the company — they are trying to replicate and fill the gap with older companies in the field (Mouqdib, for instance, relies on his personal learning and past experience, from his childhood to working in the tea industry). Aiming at perfection is manifest in details about processes of selecting and harvesting different types and blends of tea, provided in the Message of the CEO and co-founder Mouqdib and in the Story of TWG Tea (viewed online in the website and in the print book in the tea salon). TWG Tea respectively commits that “the brand continues to foster a reputation for innovation, consistency, taste, and interior design on a global scale” (The Story of TWG Tea). It may be added that the company is persistent in keeping its design, marketing, advertising and PR functions in-house (i.e., as departments in the organization, as opposed to outsourcing; cf. Mouqdib in Forbes).

Before conclusion, two cautionary notes are advisable. In using the year “1873” in its logo TWG Tea might be somewhat misleading consumers (not everyone may notice that the customary word ‘established’ is missing), making them believe that the brand is that old — a kind of  ‘imagined heritage’ of TWG Tea, but well re-constructed. Another cause for confusion could be the sound of its name — ‘TWG’ can be mixed up (particularly if one tries to pronounce it ‘Twig’) with the name of the English Twinings tea, founded by Thomas Twining in 1706 in London. (They have a flag store on 216 Strand, a location kept since inception, originally as a coffee house — tea became popular several decades later when customs were lowered and tea became less lucrative and expensive.)

TWG Tea is a young ambitious company, coming from the Far East, but with passion, a clear mission and plan tailored to our times, capable of disrupting the tea market. They especially understood well the importance of tying the drink product tea with a range of customer experiences. Their way of following tradition and re-constructing a heritage is also remarkable. They built customer experiences with a compelling brand story — time will tell if TWG Tea holds a winning formula in its hands.

Looking Ahead of the Merger of a French-Italian-American Automaker

The Advanced Technologies Awaiting Travellers in Tourism and Hospitality

Whose Word Would Consumers Prefer to Accept: Human or AI’s?

Complications of the Personal Choice to Get Vaccinated Against COVID-19